We always need drivers for car-pooling, and we also look forward to suggestions of trips from the membership. Please email Kathy Hutchins at widowh@hotmail.com or phone 609 430 1565 if you know of any interesting places to visit. Mary Ellen Parry has joined Kathy in finding outings.

Other possible FUTURE TRIPS:
We are working on details of a trip to the Zimmerli Museum. Stay tuned. Other trips being considered: Morristown and Montclair have wonderful museums.  How about Bowman Wildflower Center, and Duke Gardens? Museum of American Glass in Millville NJ, Blooming Grove Village is a possibility that could be combined with a visit to the NJ State Police Headquarters and Museum in West Trenton. Another suggestion is Princeton Doll and Toy Museum now located in Hopewell, which currently has an exhibit featuring American Presidents; admission is five dollars. Other places: backstage tour of McCarter Theater; Amazon Warehouse is a suggestion where a friend of Alyce Conlon visited recently.  Another suggestion is for a trip to Grounds for Sculpture, or a boat ride on Mercer Lake.  Another suggestion is a trip to Madison, NJ to Drew University for a tour of the Shakespeare Festival’s backstage, costumes and props warehouse.  Firestone Library is unable to accommodate tours from outside groups at the moment. Apologies that their policies have changed recent years.

On December 6, 2022 we met at 10:45 at the Kuser Farm Mansion at 390 Newkirk Avenue in Hamilton for a free 45 minute “Christmas at the Mansion” tour.  It’s a lovely old mansion filled with antiques and decorated for the holidays.   At noon we had lunch at Padrino’s Bistro nearby at 2452 Kuser Rd. (Padrino’s is in a strip of shops near Yardville Hamilton Square Rd.)  https://www.hamiltonnj.com/KuserMansion. Organized by Kathy Hutchins.

November 11 Friday Veterans Day, we were going to combine Trip and Walk, for a docent-led tour of the beautiful Grounds for Sculpture at 11:30 and lunch at Rats at 12:45, organized by Jan Stout. Because of rain the tour was cancelled, but the group went ahead and had lunch as planned.

On Thursday, October 27th, we visited the Mitchener Museum in Doylestown to see the exhibit

“Walk This Way: Footwear from the Stuart Weitzman Collection of Historic Shoes.  The exhibition presents over 100 pairs of shoes from the extensive private collection assembled over three decades by iconic designer, Stuart Weitzman, and businesswoman and philanthropist, Jane Gershon Weitzman. Highlights range from a pair of satin wedding shoes worn in 1838 to a pair of glam-rock platform sandals from 1970s London. In exploring the process of shoemaking, the role of women in one of the first mass production industries, and their participation in the forming of organized labor, the exhibition presents the story of the shoe as it has never been told before.  This was a fun exhibit. We carpooled from Kathy’s house at 10:00 and had lunch at Quinoa Restaurant in Doylestown after visiting the museum.  I actually have pictures of Nancy Lifland, Ari Wittke, Doris Tazelaar, Barbara Johnson, Gay Culin, and Beverly Kestenis eating lunch at Paganini’s on June 25, 2015 – at 1:16 P.M.!!!! — Kathy
*********

We visited Phillips Mills in New Hope for their juried art show of Pennsylvania artists from the Doylestown area on Thursday, September 29, 2022. Because t

Thursday, August 25th, we visited the NJ State Museum on State Street in Trenton with lunch following at Malaga restaurant in Hamilton.  Photos by Nora Ananos.

May and June trips – none was scheduled.

April trip to Clinton was cancelled and will be rescheduled.

We visited the art exhibition, titled “Meaningful Beauty: The Vibrant Vocabulary of Honeysuckles”, at The College of New Jersey (TCNJ) on Thursday, March 10, 2022. We car pooled from Kathy Hutchins’ house at 10:30 a.m. and had lunch at Vidalia Restaurant in Lawrenceville following our art exhibit visit.  Photos by Nora Añaños.

No trip January and February 2022.

We visited the Mitchener Museum in Doylestown, Pennsylvania, on Thursday, December 16, 2021, carpooling from Kathy Hutchins’ house at 9:30 AM. The exhibit “It’s Personal: the Art of Robert Beck” was the main attraction. We had lunch in Doylestown after visiting the museum. Organized by Kathy Hutchins. Photos by Nora Añaños.

So, it’s time to hit the road, get out and about.  On Wednesday, October 27, 2021, we went to Lambertville for lunch at the Bowman Restaurant. We got to Lambertville early to shop and walk around a bit. Some of you may remember our last visit to Lambertville where Doris Tazelaar bought a great sweater for five dollars! (I’m not kidding.) This time, Doris bought three blouses for a great price again.  After lunch went to Phillip’s Mill to see its 92nd Juried Art Show.  The Mill is on the National Register of Historic Places and you can find out more about the show at www.Phillipsmill.org/art/juried-art-show.  We car pooled from my house.  The weather was wonderful!   –Kathy Hutchins (Photos by Nora Añaños)

We went on a trip to Morven Museum and Garden on Thursday, May 6, 2021 at 10:00.  This trip was our first outing since last winter (home-bound due to the COVID pandemic). The trip included a tour of the house, and current exhibit “In Nature’s Realm: The Art of Gerard Rutgers Hardenbergh”, a tour of the gardens, and a box lunch.  The cost of the whole tour was $35.00.  Without lunch the cost was $13.00. Easy walking.  Some car pooled from Kathy’s house. Guests were welcomed. Trip was organized by Kathy Hutchins; photo collage by Nora Añaños.

In April, a few Board Members made a trip to Nora Añaños‘ house. Nora had extended a special invitation to the Board Members and their guests to visit her home Friday, April 30, 2021 at 2:00 p.m. to see Nora’s art work, listen to Juan, her husband, play the piano, and enjoy some food.

We went to The College of New Jersey Art Gallery on February 25, 2020 for a tour of “Caroline Kent: A Form Walks Toward You In The Dark”. The tour started at 10:30 a.m.  We car-pooled from Kathy’s house, and had lunch afterwards. The people who went were Jan Stout, Nora Añaños, Kathy Hutchins , Elaine Rafferty, Isabella (docent), Pat Ward (friend of Jan Stout), Danuta Buzdygan-Stys, and Connie Loukatos. This link has more information about the exhibition (Feb 5 – March 15, 2020).  The show features works on large unstretched canvases, mid-sized canvases, and three-dimensional wall-mounted sculptures that engage with unexpected gallery spaces like corners and doorframes. Margaret Pezalla-Granlund, director of the gallery, had arranged for an art history student interning with the gallery to give us our tour.  It was marvelous. By the way, our last tour of this gallery on October  29, 2018 was exceptional also.  We met and visited with the artist and as well as other TCNJ art students.  It was enormous fun…intimate and very personal.  Both trips to TCNJ were organized by Kathy Hutchins. Photos by Nora Añaños.

On December 13, 2019, Friday, the group went to ArtYard, a contemporary art center in Frenchtown (website: https://artyard.org/), to see the exhibit of multimedia works of 88 year old Janet Ruttenberg, then followed by lunch and some shopping. -organized by Kathy Hutchins.

A trip was made to the Roebling Museum on Friday, November 22, 2019 at 11:00 a.m. with lunch after at Villaggio Iccara Restorante in Yardville, NJ.  The trip included a walking tour of about 20 minutes of the town of Roebling that the company created. The tour started with a short film. (Photos from trip) – organized by Kathy Hutchins.

Friday, September 6, 2019, trip to the Mitchener Museum in Doylestown  for a docent-led tour of the exhibit “The Color of the Moon: Lunar Painting in American Art”. Our docent was Alice Lawler who led the tour of the Wyeth/Hurd exhibit that we liked so much. The tour was followed by lunch and retail opportunities in Doylestown.  We are grateful to the carpool drivers. –Kathy

One of our board members, photographer Nora Añaños, had won a prize at the West Windsor seniors art exhibit (July 17-Aug 9) at Meadow Lakes. On Tuesday, August 6th, 2019, a group of us went to see the exhibit at Meadow Lakes and had lunch after at Fernando’s restaurant in Hightstown.  It’s a wonderful show and Nora’s still life painting is fabulous.

July 24, 2019, Wednesday: we visited the Delaware Art Museum in Wilmington to see the Caribbean Art exhibition.  We are very thankful to our carpool drivers (approx. 1 hour and 20 minutes). (Photos courtesy of Nora Añaños)

February 26, 2019: Tour of the Sarnoff Collection at the College of New Jersey with lunch after at the Panera on TCNJ campus.  The Sarnoff Collection website will give you a taste of what we saw.  There are wonderful exhibits of Orson Wells’ famous “alien landing” in Govers Mill of 1939 as well as the television coverage of the first moon landing.  The tour was conducted by Florencia Pierri, Curator of the Sarnoff Collection.  “Flori”, the curator of the collection, is a graduate student at Princeton University, and the tour focused on the role of women in communication and the early days of television. –tour organized by Kathy Hutchins

December 7, 2018 to Princeton University Art Museum, for the major new exhibition of landscape paintings “Nature’s Nation: American Art and Environment” on view there from October 13 to January 6, 2019. Once again our favorite docent, Jane Ashcam, conducted the tour. Lunch after at Prospect House Garden Room. Organized by Kathy Hutchins.

2017-2018 past trips
June 22, 2018. The tour of the Frank Stella Unbound: Literature and Printmaking exhibition took place on Friday, June 22nd at 2:00 P.M.  at Princeton University Art Museum. Once again our favorite docent, Jane Ashcam, conducted the tour.  Following the tour tea and sherry at Kathy Hutchins’ house to share suggestions for trips for next year, visit with Trixie and perhaps the cats, Mr. Tubs and Sparkle, if they promise to behave, and plan summer excursions.  There was a lecture, Saturday, May 19th at 5:00 P.M. at 50 McCosh Hall and a reception after at 6:00 P.M. at the Princeton University Art Museum to prepare for the tour.  Photos by Nora Añaños; trip organized by Kathy Hutchins. 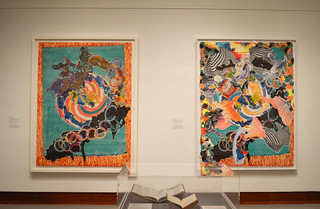 April 16th, 2018 Monday. HomeFront Art Jam Pop-up Gallery,
Once again, HomeFront sponsored an exhibit of professional and undiscovered artists in support of HomeFront’s ArtSpace.  The Exhibit was located at 19 Hulfish Street in Princeton.  A group met at 2 pm. at the store and then to Kathy’s house for tea.  The art work again was lively and there were all kinds of crafts.  And, it was supporting a wonderful organization with whom we have shared interests.  Kathy Hutchins

March 16, 2018. We went on a tour of the Princeton University Lewis Center of the Arts. We met at the Forum level.  The tour was conducted by Danielle Dennis, Venue Manager, and Raymond Chalme.  We had lunch separately afterwards.  photos by Nora Añaños. Organizer: Kathy Hutchins. 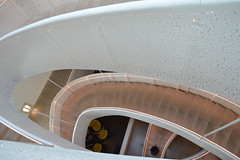 February 15, 2018. We visited the Michener Museum in Doylestown, Pennsylvania for a tour of the exhibit “Magical & Real: Henriette Wyeth and Peter Hurd, A retrospective”. 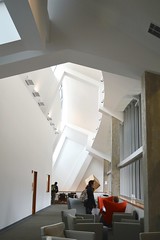 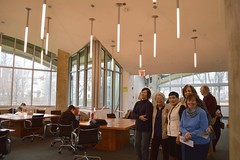 October 25, 2016 (photos) tour of the Andlinger Center for Energy and the Environment. The Center is the newest and one of the most exciting academic buildings on the Princeton Campus and is located at 86 Olden Street. Check out the website  http://acee.princeton.edu/about/building/. The tour was conducted by Jennifer Poacelli, Associated Director of Administration. Moire Selinka, Education and Outreach Coordinator of the Center,  joined us at lunch afterward at the Garden Room in the Prospect House on the Princeton University Campus. 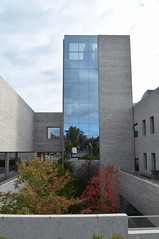 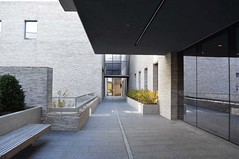 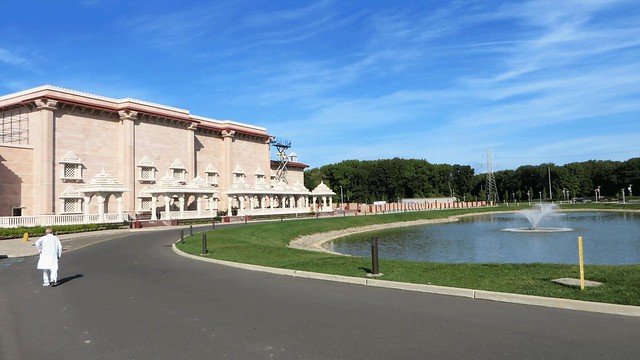 2015-2016 Past Trips (click hyperlinks to see photos or othere websites)
May 2016 new headquarters of SAVE, a Friend of Homeless Animals www.savehomelessanimals.org
April 2016 Open house at the Princeton University Andlinger Center for Energy and the Environment.
February 2016, tour of PPPL (Princeton Plasma Physics Lab), then lunch at the site’s cafeteria. Click here to see photos taken by Nora Añaños.
December 2015: Princeton University Firestone Library tour, then tea and sherry at Kathy’s home after tour.
October 2015, tour of the new Frick Chemistry Laboratory Building on Princeton University campus on Washington Road led by Alice Monachello, Facilities Manager of the Laboratory.  Click this PDF file or this hyperlink to read an article about the woman sculptor who designed the “clusters of translucent orbs suspended from the 75-foot-high glass roof into the atrium.” Then lunch in the “Chemistry CaFé” right on site. Click here to see Photos.